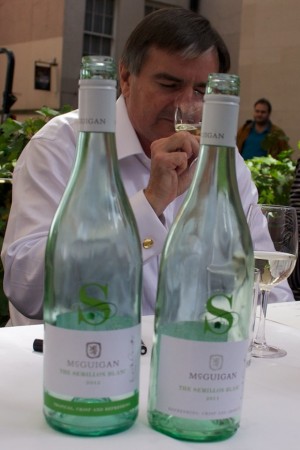 I’m sitting in a vineyard on a gloriously sunny day with a glass of Semillon in my hand. Nothing unusual about that, you might think. Except the vineyard is in the centre of Dublin. And it isn’t raining.

This is not a working vineyard – though the 70-year-old Cabernet Sauvignon vines from France are real – but a pop up in Temple Bar to celebrate 20 years of Australia’s McGuigan Wines in Ireland.

I’m there to see the vineyard of course, and also to try a recent addition to the McGuigan stable, The Semillon Blanc.* 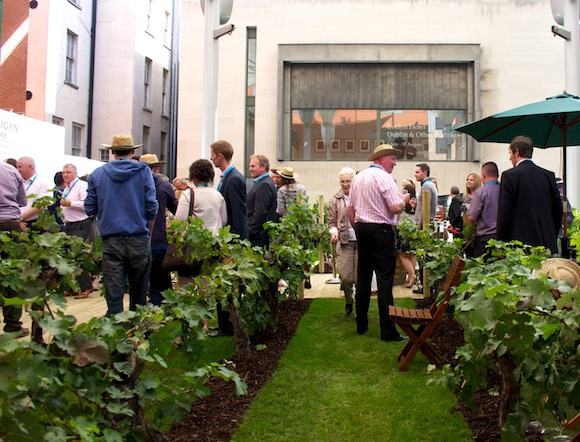 As I arrive, charismatic chief winemaker Neil McGuigan is in full swing at the bar in the vineyard, charming some trade professionals.

Soon, it’ll be my turn, as Neil leads a small group of wine writers through a vertical tasting of his Hunter Valley Semillon – from 1997 to 2011 – and then onto The Semillon Blanc.

If you think The Semillon Blanc has a certain New Zealand ring to it, you’re not far off. There is no Sauvignon Blanc in it, but then it doesn’t taste like your traditional lean and elegant Aussie Semillon either, Hunter Valley or otherwise. And that’s the point.

For Neil is on a mission to knock the Kiwi quaffer off its perch of popularity with a fruity, lightly tropical and refreshing alternative. He also wants to make sure that Hunter Valley Semillon nuts like me don’t get a shock if we buy a bottle. Hence the “blanc”. 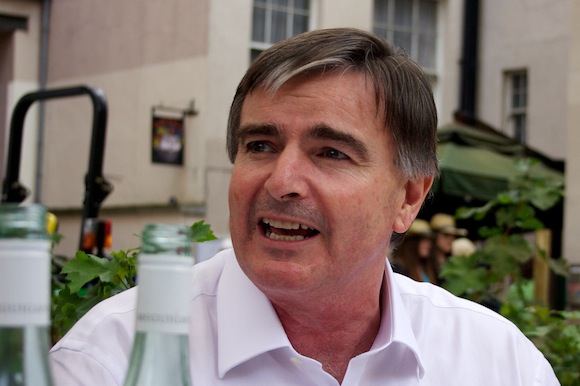 Neil explains: “A number of years ago, I was in the UK and a wine writer asked me ‘what’s new and exciting in Australian wine?’

“I went back home and thought ‘Riesling? No, the Germans have that. Pinot Grigio? No, the Italians have that. What else have we got?’ There was nothing that said ‘this is the next big thing’.”

Then someone suggested Semillon. After initially dismissing the idea, thinking the grape was too much of a hard sell, Neil hatched a plan to produce a different type of varietal wine from the Semillon grape.

“It’s an old Australian white Burgundy-style wine made with a twist,” is how Neil describes The Semillon Blanc, referring to the days when wines from Down Under tended to have generic names like “Claret” or “Chablis”.

The “twist” is down to some “clever techniques in the winery to give it tropical fruits” which includes some new yeasts. The grapes don’t come from the Hunter Valley either, but from some regions in Australia. 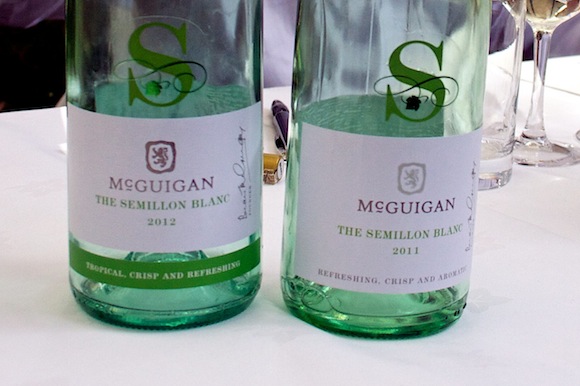 In other words, it is a marketeer’s wine made with consumers in mind, and what they like to drink, rather than one reflecting any particular terroir. And retailing at under £7, it doesn’t pretend to be anything other than that.

The 2011 is packed with ripe green apple and guava flavours with a hint of passionfruit. It is very fruity, but without the cloying characteristics you often get in Sauvignon Blancs from New Zealand’s Marlborough region at the same price point. It has a citrussy finish.

Admittedly, it doesn’t float my boat but would be a good match for Thai Green Curry (we get to try it later with some coconut prawns). Not a bad choice for a large party, either. We also taste the newly-bottled 2012 which is lighter and more focused with flavours of limes and peaches. More my thing.

Except I get spoilt moments earlier with the real deal – a deliciously toasty McGuigan Bin 9000 Hunter Valley Semillon ’97 (there’s no oak) full of preserved lemons, lanolin and straw with an undulating texture and a sharpness that indicated it could be aged for a few more years.

It’s in sharp contrast to the 2006 which is light, almost blossomy, with touches of  green melon, lime cordial and a pithy finish – a bit too in-between for me, having neither the richness of  the aged ’97 nor the crisp, lean grassiness of the 2010. It won the IWSC’s International Semillon trophy last year by the way.

We try a 2011 whose door is firmly closed to visitors but displays a lot of potential for deliciousness 10 years from now. I also manage to sneak in some 2003 – cut at the last minute from the tasting but sitting on the edge of the table just waiting for someone like me to notice it. 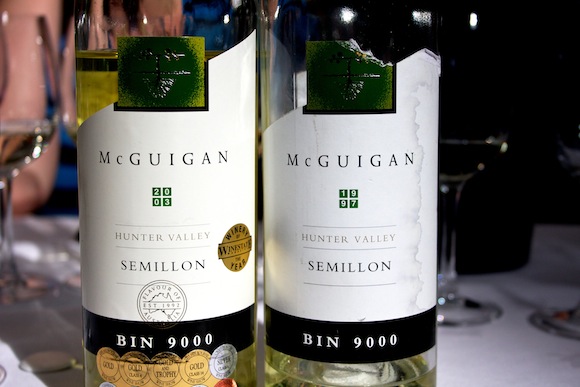 The Bin 9000 Semillon 2003 is moving to the rounder, honeyed stage, all lemon curd and white flowers. As the ’97 has all gone, it’s my choice of drink when a massive plate of salmon, oysters, prawns and scallops is brought out for the hungry tasters.

The trouble with this “Riesling” style of Semillon, as it used to be called in Australia, is it is not everyone’s cup of tea. Neil admits it is a hard sell. And when you have a successful international brand to run, you also need to make wines that have broad appeal both in terms of taste and price.

So, I wish McGuigan Wines the best of luck in trying to wean people off their Sauvignon Blanc for something similar… but different. Me? I’ll be staying old skool. 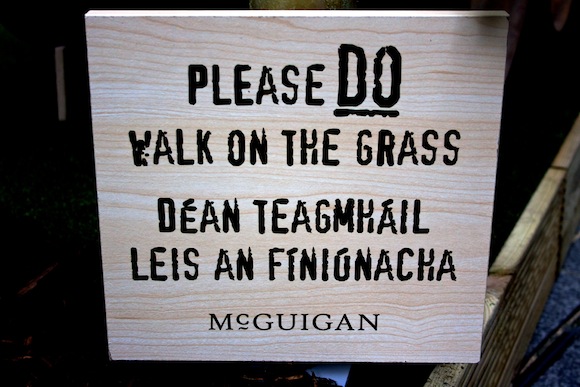 * The Semillon Blanc has been around for a couple of years under the McGuigan Classic label, first in Tesco and now in Sainsbury’s. It has now been re-branded in the UK and Ireland under the Semillon Blanc label. If you see it in a supermarket for much over £7, I think that would be an inflated mark-up designed to make any discount applied later look good.