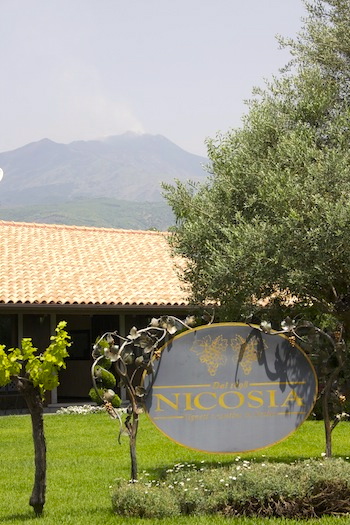 Heroic viticulture. A rather romantic term for the hard graft of growing grapes on steep, terraced slopes at least 500 metres above the sea.

Perhaps, then, growing grapes around Etna is super heroic.

After all, these vines lie in the foothills of one of the world’s most active volcanoes. Etna has erupted seven times so far this year, and a thick plume of smoke spewing from the main crater was visible on my recent visit to the region.

Luckily, Etna rarely threatens the communities below. And for wine producers, the benefits of a fertile, mineral-rich soil far outweigh the risks of a river of lava sweeping away their vineyards. Phylloxera has probably caused more damage in recent times.

I’m given a quick lesson in Etna geology and terroir from Guiseppe Monaco, export manager of Sicilian wine producer Nicosia, as we walk through the lava terraces in the Monte Gorna vineyard, which lies between two volcanic cones and rises to 850 metres above sea level. It is close to 40C – unusually hot for June, I’m told – but a gentle, cooling breeze from the Ionian sea further demonstrates the benefits of growing grapes on the eastern slopes of Etna. 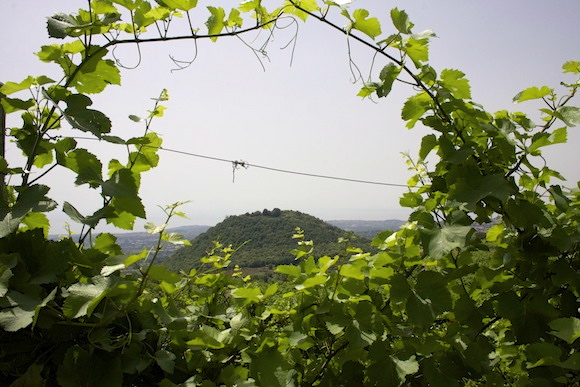 Guiseppe explains how, even within this one vineyard, the soil composition can vary within a few metres because of multiple lava flows centuries before.

As a result, Nicosia plants vines for different grapes according to what they think will work best in a particular soil. The path we take leads us through vines growing Nerello Mascalese and Nerello Cappuccio, the two grapes which make Etna Rosso DOC (the former grape for the flavour, the latter more for the colour). Further down the slope are Carricante and Catarratto vines, which are the main grapes for Etna Bianco DOC.

There are also some Pinot Noir vines – or Pinot Nero as the Italians call it. Pinot Nero grown in Etna may not have the cachet of being a DOC wine . But it does have a connection to the past for Carmelo Nicosia, the current owner. His grandfather used to grow it but, until the 1980s, most Sicilian wine was sold in bulk, which proved uneconomical for many Etna wine growers because of the high cost of heroic viticulture. Vines were ripped up in favour of other crops. This included the Monte Gorna Vineyard.

So, when Carmelo Nicosia revived the wine business – and this vineyard – he made sure there was some Pinot Nero in the mix.

Today, Nicosia doesn’t restrict itself to Etna. It owns or leases vineyards elsewhere on the island making two million bottles of wine a year. That number includes making wine for other people who grow their own grapes but don’t have the funds to set up their own winery, and own-label supermarket brands in Italy.

But it is Etna where the Nicosia story started in 1898, and where the operations are still based. Despite the shiny, superclean cantina it moved to in 2007, there is a reminder of the past as we leave the Monte Gorna vineyard: a palmento – an old-style Etna winery – replete with a massive millstone to crush fermented red grapes (the initial pressing was done by foot). 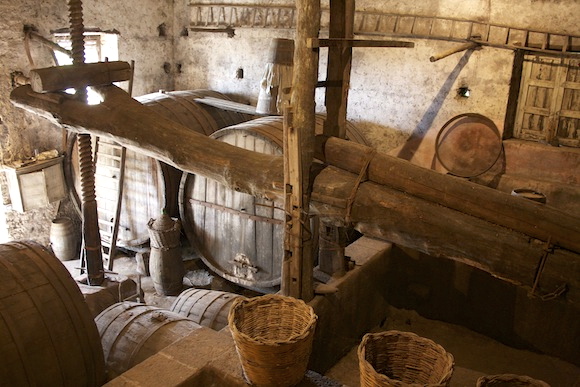 We saw one on our visit to Vini Biondi as well. However, unlike Biondi, this (along with the Pinot Nero) is where a connection with tradition stops.

Nicosia’s ambition is to grow and innovate. In terms of growth, they  are already exporting to China, Singapore, Indonesia, Japan, Australia, the UK, Ireland, Lithuania, Belgium, the Netherlands, Germany, Switzerland, Canada, Finland, Ukraine and the USA.

In terms of innovation, as well as growing Syrah, Pinot Nero and some Viognier near Palermo, Nicosia is trialling two sparkling wines made in the classic method (i.e. the same way as Champagne) one with Carricante and one with Nerello Mascalese. White-coated oenologist Maria Carella is also working on ageing some Etna wines, both white and red, in oak.

Nicosia is also big on matching its wines with food. Clear, unponcy suggestions are made on the back labels of each bottle and the team has been taking pairing suggestions beyond – gasp – the shores of Italy, carrying out some food and wine matching experiments with a cookery school in Hong Kong. Now, there’s a project with a Sicilian school. 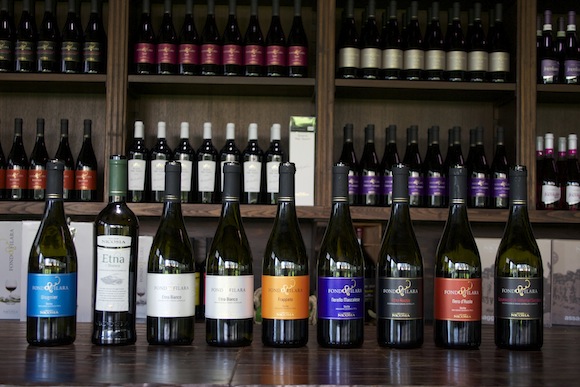 As we walk into the tasting room back at the cantina, it is clear how many lines Nicosia produces. Big certainly doesn’t mean bad though. As the awards that line the walls testify, Nicosia is producing some very good wines indeed, especially at the prices they retail for. Clean, crisp, elegant, lightly aromatic Etna whites with a super stoney, mineral edge. Fragrant, soft, mid-weight, gravelly Etna reds. Plus some wines from Southern Sicily: Cerasuolo di Vittoria, Sicily’s only DOCG wine, and Frappato, a varietal made from one of the grapes that goes into Cerasuolo (the other is Nero D’Avola).

Reader – it was love. The thought of taking a bottle of lightly chilled strawberry and mulberry Frappato onto the grass outside and forget about the afternoon was HUGELY tempting. Alas, I had to spit.

I have just followed my own advice and ordered some bottles of said Fondo Filara Frappato from The Wine Society (£8.50), along with some entry-level but delicious Nicosia Etna Bianco (£8.25) and Fondo Filara Etna Rosso (£10.95). I can’t wait.

One thought on “Etna Wines Are Smoking Hot”