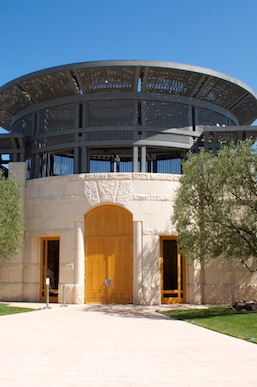 They don’t put out spittoons at the end of the tour of the Opus One winery in California. When you are presented with a glass of the latest vintage, maybe the assumption is that, if you’ve paid $40 for the privilege, you won’t want to waste a drop of this cult wine.

Opus One is big stuff, as you’d expect for one of Napa’s most sought-after wines – but without the overwhelming sensation of hot, thumping alcohol and weight that you often get with Cabernet Sauvignon-dominated wines made here. Retailing for around £200 for the 2007 (the latest release) this Bordeaux blend has found a place in many an investment banker’s heart. And those who live and die by Robert Parker’s 100-point scoring system. 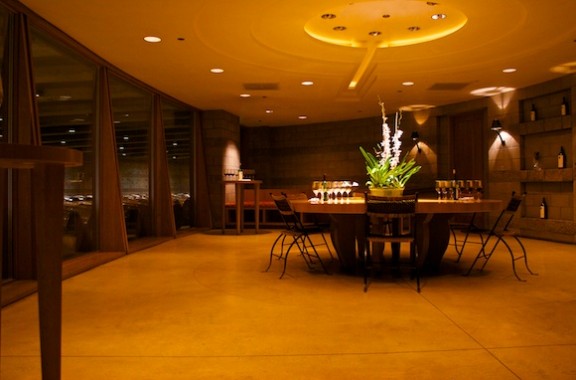 Opus One is the result of a partnership between Napa wine pioneer Robert Mondavi, and Baron Philippe de Rothschild, of Bordeaux first growth Château Mouton Rothschild, who wanted to make the very best wine they could, representing the styles of both Napa and Bordeaux.

It is, if you like, a testament to what money can buy.

For a start, the winery (now 50% owned by wine-brand behemoth Constellation) only makes one type of wine, with a second label – Overture – produced most years.

Grapes are sorted by hand, twice (after being handpicked at night). Then they are put through a machine that reads the weight and density of each grape, discarding those that don’t make the grade. According to Marie, our perky, informative tour guide, there are only 30 of these in use in the world.

Using gravity to crush the grapes, they are funnelled down into mini tanks-on-wheels, which connect with the tops of the fermentation tanks in the room below that poke up through the floor. 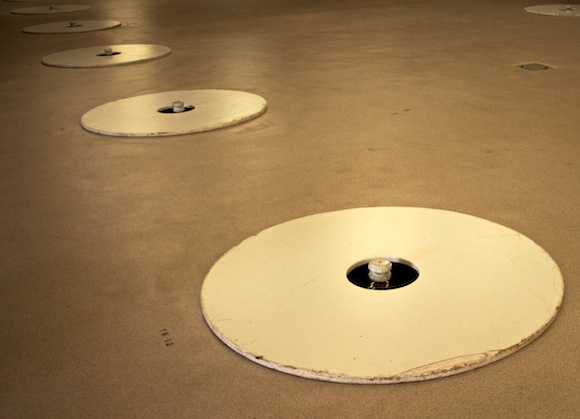 The new French barrels used for ageing are used for one vintage only. The wine will see the inside of 14 barrels, each made by a different cooper and done to medium toast. When finished, the barrels will be sold for around a third of the original price to other winemakers who will probably get at least another two years’ use from them. 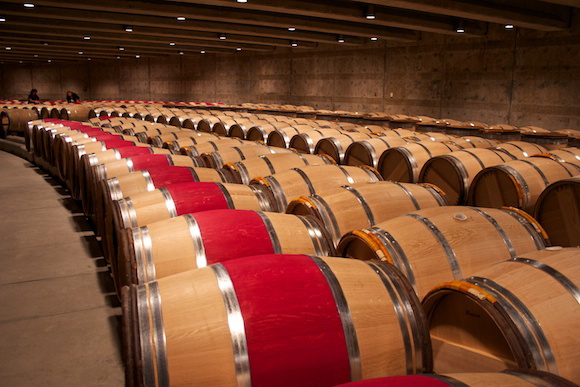 The Opus One winemaker and his team also make around thirty test blends each year before deciding on the version to be bottled.

They test 100 corks for every 10,000 they order for TCA – the substance that can make a wine smell and taste corked. If just one cork shows a trace of TCA, they return the whole batch.

Then there’s the building itself. Part spaceship, part Bond-villain lair and part French château, classical music guides you up to the heavy wooden doors where a concierge greets you and guides you to a “salon” with some antique furniture plus modern masterpieces hanging on the walls.

After the tour, you can sit on a verandah and finish your wine, surveying the vineyards. Or visit the partners’ room (i.e. the cellar door) where you can spend another $35 trying the ’06 for comparison. I might have done that had we been able to sample a vintage that could give a better idea of how it ages ” effortlessly for decades” rather than one from the year before. I don’t imagine there’s much of it around that isn’t locked away in private cellars or high-end restaurants. 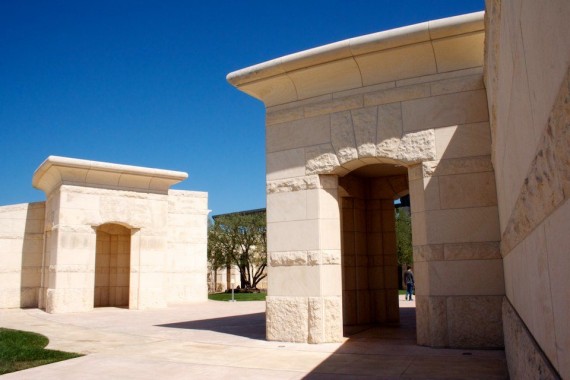 So what of the wine? After two-hours of sitting in a glass, the 2007 is supple, velvety and lightly perfumed with layers of dark berries, prunes, cedar, lead, sweet spices and tannins that were ripe enough to sip without any food. It is powerful but very precise. Then again, given the labour that goes into making each vintage, I’d expect nothing less.

You could argue, though, that this quest for perfection may have come at a price: character.

I am reminded of this a few days later on a visit to the Bonny Doon cellar door in Santa Cruz. There, a sign spells out the differences between wines made by the efforts of man versus those that reflect where the wines were made – and the grapes grown. 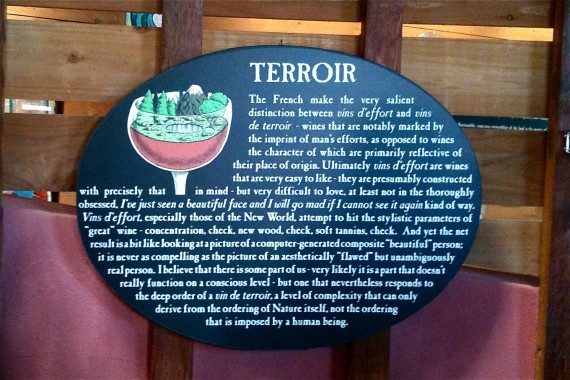 I’m not saying you cannot have both. If someone bought me a bottle of Opus One, I certainly wouldn’t hand it back.

But a world where people judged great wine purely on the efforts of man would be a very dull place indeed.

As the saying goes, you can make a bad wine out of good grapes. You cannot do the reverse.

Note: If you do fancy buying a bottle, Majestic Fine Wines seems to have some for £185 each. But you have to buy at least five other bottles of fine wine…

One thought on “Where Every Grape Is Sacred”