Restrained. Not a word you’d usually associate with Californian wine. And yet, here we were, drinking a succession of decidedly unshowy whites at the Dry Creek Kitchen in Healdsburg, Sonoma.

This is not the first time we’ve been here and  – given its distance from grey old London – we always splash out on the tasting menu with wines. It’s one of Mr. SipSwoosh’s favourite things to do in one of his favourite places in the world.

However, I don’t remember the white wines being quite this reined in when we were last here, three years ago. 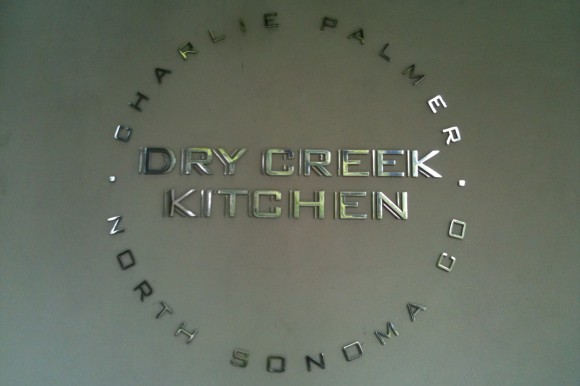 The Dry Creek Kitchen – one of Charlie Palmer‘s stable of restaurants – prides itself on a cellar of more than 600 Sonoma wines. It adds a $20 supplement on all bottles of non-Sonoma wine ordered. Which is all well and noble, though a little disingenuous perhaps when the starter we had featured a fish from New Zealand.

But as many of the local wines never make it into a shop, let alone out of the state (boutique wine production can be very limited), then this is one of the best places to try the good and the great from the surrounding wine appellations(or American Viticultural Areas – AVAs) such as the Dry Creek Valley, Russian River Valley and Green Valley.

We began with a delicate pink rosehip-infused glass of Russian River Valley J Brut Rose NV made from Pinot Noir in the traditional method (like Champagne). According to J Vineyard’s website, the diaphanous look and taste of the wine is down to the only operating Coquard Press in the US, which keeps the bunches of grapes stationary, reducing contact between skin and juice. Whatever. It was good.

While we liked this, we didn’t fancy another glass of fizz with the first course – seared Kampachi fish with avocado mousseline, pickled rhubarb, purslane (a type of salad) and kaffir lime oil. All in tiny proportions of course. We asked for a wine swap and were served a glass of Lime Stone Sauvignon Blanc 2010 from Dry Creek Valley – which I believe is made for Charlie Palmer. The logo is the same as his wife’s shop next door.

“Made in the New Zealand style,” we were told. Which part? Certainly not Marlborough. Far too verdant: nettles, grass, green leaves. Lots of minerals. Austere to drink but matched the tartness of the rhubarb and the oiliness of the fish. 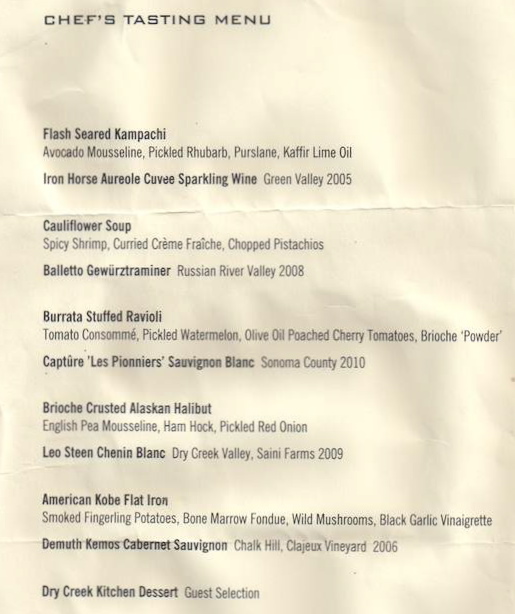 The Balletto Gewurtztraminer 2008, also from Russian River Valley, was the big surprise. Fresh lychee on the nose, it carried a mere tickle of the spicy punch you often get with this grape. Fresh and zincy, it was a stood up, but didn’t overpower, cauliflower soup with curried creme fraiche.

The Capture Les Pionniers Sauvignon Blanc 2010 from Sonoma County was a kinder wine to drink than the Lime Stone. Quite a tropical wine, but with enough acidity to balance with a tomato consommé, pickled watermelon (they’re obviously into pickling), cherry tomato and burrata stuffed ravioli. Burrata? Take a ball of creamy mozzarella and add MORE CREAM. 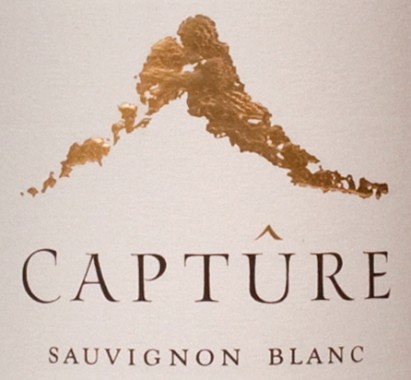 Highlight of the meal was the crunchy brioche-crusted Alaskan halibut with an English pea mousseline, lettuce and bacon. It came with a glass of Leo Steen Dry Creek Valley Chenin Blanc 2009 which had a surprising but appealing smell of custard powder though reassuringly citrusy and mineral to drink, with a herby finish. I liked it so much I tracked down the wine maker, Leo Hansen – a Dane who now makes wine for Stuhlmuller, as well as a couple under his own label. Oh, and he used to be sommelier at the Dry Creek Kitchen.

After all these relatively understated wines, it was a bit of a shock to end on a big minty, smoky, squealing-tyre red, a Demuth Kemos Clajeux Cabernet 06. Too tannic to drink on its own, it was like Friends Reunited with the seared meat and smoke of the accompanying dish: American Kobe flat iron steak with smoked fingerling potatoes.

Actually, this wasn’t the last wine. But at this point, I’d drunk more than I had for a number of weeks and the dessert choice and wine pairing was off the main menu (of which I don’t have a copy). I’ve also lost the receipt. So I only have my wine tasting notes to rely on: “reisling – sticky nose fresh palate hpneysuckle citrus peel ( w/ drssert) nuts.” Oh.

I took a dark picture of the dessert and I can see it involved panna cotta. Beyond that, I have no idea.

Promise to do better next time – which I hope won’t be in the too far distant future. 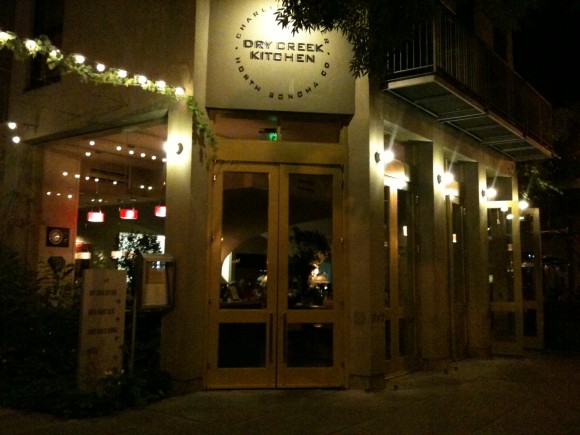