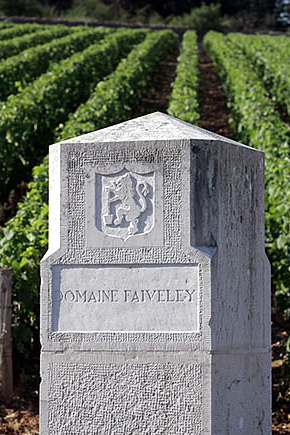 Bordeaux or Burgundy wine: Which do you prefer?

I found myself pondering this weighty question when I was invited to a tasting and dinner with Burgundy producer Domaine Faiveley – the very week the Bordeaux en primeur circus hit London.

I’ve always been seduced by the brooding, square-jawed promise of a left-bank red. But increasingly, I’m finding the slinky moves of both Burgundy reds and whites more alluring.

Burgundy is not easy to get your head around because this long, skinny region has more appellations than anywhere else in France. There are four levels of classification within those appellations based on the place the grapes are grown, from region to single vineyard, rather than who makes the wine. Not everywhere has Premier Cru or Grand Cru status vineyards. But that doesn’t mean the wines from these villages aren’t good. On the other hand,  as many vineyards are split between producers into parcels –  there’s no guarantee they’ll all make great wine, even if the bottle says “Chablis” or “Pommard”. So, like anywhere else, it pays to know your producers.

Domaine Faiveley is one of Burgundy’s biggest wine producers. Almost 200 years old, it is still a family-run business, but has expanded in recent times to own (and lease) parcels of vineyards – and some entire vineyards – throughout the region.

It makes more than 100 different wines each year from just two grape varieties: Chardonnay and Pinot Noir. So, I was hopeful of a decent trot around Burgundy at the tutored tasting and dinner organised by Château Boundary, a wine club run by Boundary in Shoreditch, East London.

The tasting, idiosyncratically held in the Idea Generation Gallery amid Acid House artwork, focused on six styles of Chardonnay.

We started by comparing north and south with two entry level wines from 2009,  a Joseph Faiveley Chablis and Mâcon-Prissé (in the Mâcon-Villages appellation). 2009 was a warm year, which means fruitier, fleshier wines than preceding years. Therefore, the citrus, herby Chablis had a nice roundness to it – which might disappoint lovers of the super-steely stuff. It still had a reassuringly flinty edge.

The Mâcon-Prissé was, as you’d expect from grapes grown more than 100 miles south, a bit more plump. I tasted creamy apples, both flesh and skin. We touched on terroir, but this was pretty much abandoned after after an attempt to explain classifications within appellations. We didn’t really have the time. 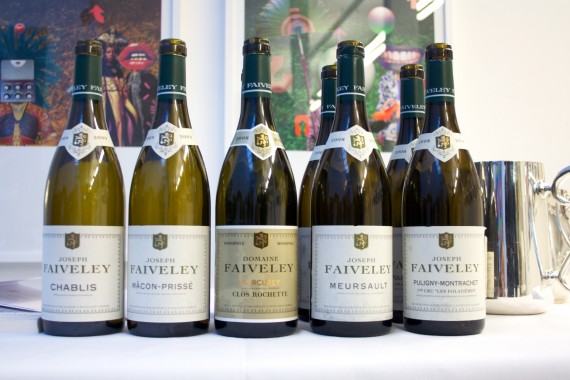 Next we tried a 2007 Domaine Faiveley Mercurey “Clos Rochette”  (a vineyard the Faiveley family owns outright). Vincent Avenel, Domaine Faiveley’s export director explained how 2007 was a cool year which was “positive for the whites” because of the high levels of acidity they would have. And this one certainly was very clean and fresh-tasting.

High acidity in a Chardonnay can indicate a potential for ageing. “How long will this age for?” I asked. Now, a simple answer would’ve been “like the Chablis and Mâcon-Prissé, we made this wine for everyday drinking.” Instead, I got a long winded, rather patronising answer from Vincent’s co-presenter Mark Bingley MW, the Fine Wine Director of Faiveley importers Maison Marques Et Domaines Ltd all about how consumer tastes changing, people wanting to drink wines now – not lay down wines for a long time, how this would go with fish and so on. When he finished, the guy sitting next to me whispered: “I’m glad you asked”.

We moved onto a 2008 Joseph Faiveley Meursault, this one showing you don’t have to have a outrageous price tag (this retails at around £25) or Premier Cru status to experience a decent wine from this famous village. This Meursault tasted of crisp stonefruit, buttery sponge cake and a twinkle of some savoury developments to come – though it’s enjoyable now.

Finally, we stepped up to a Premier Cru – a 2008 Joseph Faiveley “Les Folatières” Puligny-Montrachet. Elegant, integrated and also ready to drink, this smelt of honey, nuts and white flowers and had a nutty, vegetal, grapefruit palate with a wisp of smoke curling through. I liked it. Very much.

Running a bit late, we scuttled next door to a stygian corner of the underground Boundary Restaurant to taste some reds over dinner.

With charcuterie we had a fresh, fruity 2007 Domaine Faiveley Mercurey “La Framboisière” – another vineyard owned outright. Vincent told us how raspberries used to be grown where the vines are now, hence the name. Although it’s also an apt descriptor of its current usage, given the raspberry flavours in the wine. 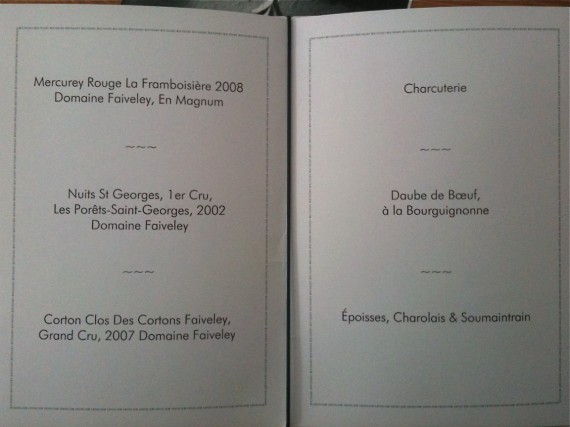 Vincent tee-d up the next wine, a 2002 Domaine Faiveley Nuits-St-Georges Premier Cru “Les Porêts-St Georges”, by describing it as masculine with mushroom notes coming through and it would cut nicely through the fat in our daube de beouf. Except my daube was a bit tough and distinctly unfatty (an experience some, but not everyone, around the table shared). And I found the wine still rather taut. Rupert, the sommelier, who’d opened the wine about four hours earlier, suggested it might be going through an adolescent phase – when some wines clam up for a period while they age. In other words, a sulky teenager who won’t come out of his room.

There was no surliness with the last wine, a Grand Cru from Corton in the Côte de Beaune. The 2007 Domaine Faiveley Corton “Clos des Cortons Faiveley”  is one of only two Grand Crus allowed to use the name of the vineyard owner – the other is Romanée-Conti. It has vines dating back to 1936, and there’s some iron oxide in the soil, along with limestone and marl.

Vincent explained how 2007 went from a very early summer straight to autumnal conditions, which was not good for making Corton reds to age.  My notes say: silky, supple, juicy red cherries, roses, some earthiness, ready to drink. Now THAT’S what I call a happy finish.

PS: I didn’t ask where we could buy the wines and there was no hard sell either. A search online shows Slurp.co.uk and Berry Bros & Rudd both have a selection.

The next Château Boundary event is on Monday, 27 June with Nicole Rolet from self-styled “super Rhone” producers Chêne Bleu wines. Nicole, an ex-banker, is married to the Chief Executive of the London Stock Exchange. So, given Boundary’s catchment area, expect lots of wine dreams to be fuelled that night.

One thought on “Every Good Girl Deserves Faiveley”