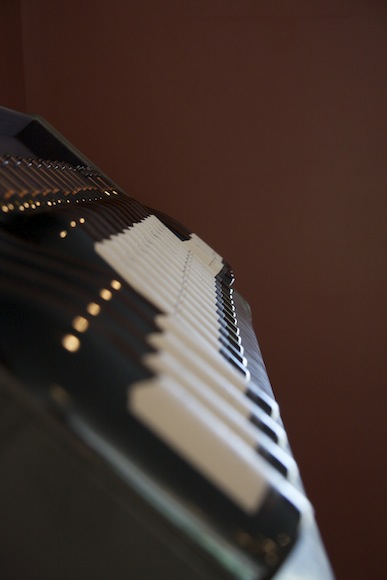 Every road trip needs some downtime. Our downtime on our two-week jaunt through a large swathe of New Zealand was in Hawke’s Bay. To be honest, the real reason we stopped there was to visit the art deco city of Napier, a place I’ve always wanted to see. Calling in at wineries played second fiddle. Oh, except we stayed on one. We rented a tiny studio from Te Mata with a wrap-around deck overlooking the vines. And a handy decanter. 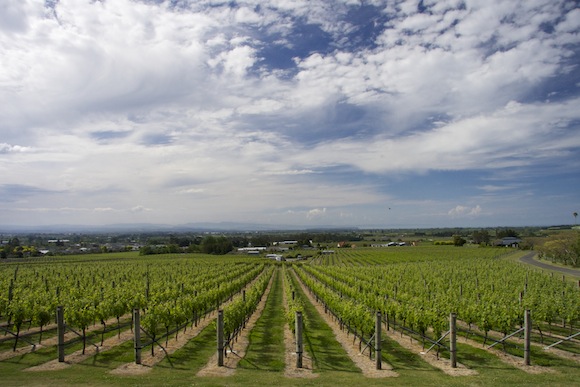 We chilled for a couple of nights, working our way through piles of food from Bellatino’s in Havelock North and playing more crap hands at s Scrabble. Te Mata left us a bottle of Woodthorpe Syrah in the studio, which I found a bit chunky and sweet. I think it was 2009 but I didn’t make a note of the year. We bought a bottle of the Woodthorpe Chardonnay 2009, which had a rich, tropical nose but was much fresher on the palate. Lots of flavours: stonefruit, lemons, almonds, light oak, plus good minerality and some lively acidity. We also drank the Schubert Block B Pinot Noir while we were there. But, I’d like to make clear, not all on the same night…

Hawke’s Bay is New Zealand’s oldest region, and, after the boutique vibe of Martinborough, I found some of it a bit corporate. At Te Mata, for instance, only glass divides the cellar door and its busy back office and, as friendly as the people at Te Mata were, I didn’t feel it was a place we could hang about and chat about wine. They had a business to run. We did pop by for a tasting the next afternoon, which was perfectly pleasant but quick.

Craggy Range was very slick and polished. It’s impressive cathedral-like complex in the shadow of the Te Mata peak was abuzz with diners leaving after lunch, a wedding party preparing for the next day’s big event and a local film crew creating New Zealand’s next sci-fi epic in amongst the rows of vines at the back.

The cellar door was like stepping into a library – its wooden shelves lined with bottles instead of books. The besuited woman managing the cellar door that day said that Craggy Range was the only winery in New Zealand to own vineyards in the best wine-growing regions in the country (as opposed to leasing them or buying grapes from select growers I suppose). Its mission is to make the best single vineyard wines from regions renowned for particular grapes.

So, for example, there are Pinot Noirs from Martinborough and Central Otago, Sauvignon Blancs from Marlborough and Martinborough. Since Hawke’s Bay is known for Chardonnay and Syrah, there are wines from various blocks around the region, including the Gimblett Gravels, with its greywacke stones. Similar to the pudding stones in the Southern Rhone, these retain the heat from the day and reflect it back onto the vines at night, which helps gives extra ripeness to the grapes. We tried the full-bodied 2008 Gimblett Gravels Syrah which was crammed with the black stuff – currants, cherries and pepper and also the Te Kahu 2008 blend of Merlot, Cabernets Franc and Sauvignon plus Malbec – blackberries, cedar and herbs with some taut tannins primed to attack a slab of red meat.

We compared two Chardonnays from two different vineyards and vinification styles – one fresh and creamy from Kidnappers Vineyard, and the other rich and buttery from Seven Poplars Vineyard. We did the same with two Pinot Noirs from different regions, and sampled a Kabinett-style Riesling from Glasnevin Gravels in Waipara and the zippy 2008 Te Muna Sauvignon Blanc from Martinborough, which tasted of leafy blackcurrants and wild thyme.

Had we planned it better, we could have eaten lunch there and tasted some of the wines after they’d had some cellaring. But with so many wineries with restaurants in Hawke’s Bay, we took longer to decide where to have lunch than we did to eat it. In the end we plumped for the homely and definitely un-slick Clearview Estate. The twice-baked blue cheese souffle matched with the broad flavours of the 2009 Semillon (straw, oak, butter and grilled pineapple) was quite simply to die for.