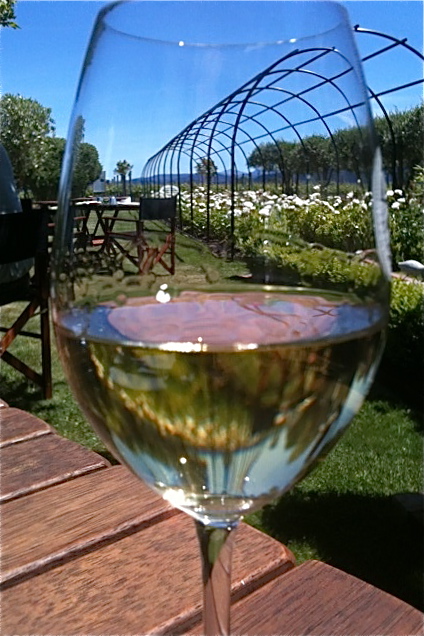 For most people, Christmas Day is all about the food. For me (surprise!) it’s all about the wine. This year, the star of the show will be a 2001 Herzog ‘Spirit of Marlborough‘, a smooth mocha, cassis, liquorice and Agen prune-tasting Merlot Cabernet blend. It shouldn’t overpower a gamey, slow-reared Turkey with a punchy stuffing. But if it does, do I really care?

Like Seresin Estate, which I wrote about in my last blog, Herzog winery is another of the five New Zealand producers comprising Marlborough Natural Wine Growers (MANA), dedicated to organic and biodynamic viticulture. Intrigued by what I’d learned at Seresin, Mr. SipSwoosh and I decided the only decent thing to do was to visit the other four. 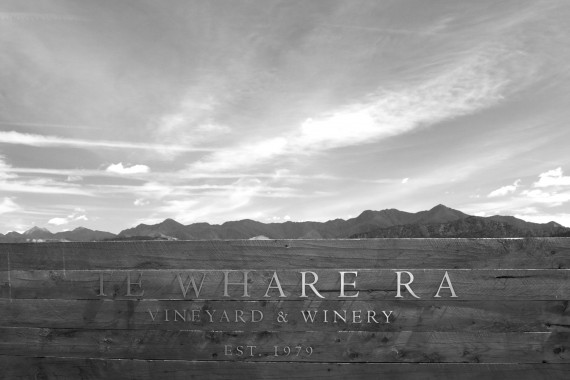 First up was Te Whare Ra. We arrived on the dot of 11am, when the cellar door was due to open. It still looked pretty closed. But a man on lawnmower waved, asked if we’d come for a tasting then disappeared.  That was Jason Flowerday, owner and winemaker. Shortly after, the cellar door upstairs opened. This was his wife, co-owner and fellow winemaker Anna Flowerday who was also managing the cellar door that day. As you can guess, Te Whare Ra (TWR) is a small, family-run operation but that hasn’t stopped it producing an ambitious wine range though currently none of it makes it to the UK.  Jason’s a local boy who met Australian Anna when they both worked in her home country for large brands. Several years and four small daughter later, here they are, running a small estate with some of Marlborough’s oldest vines. 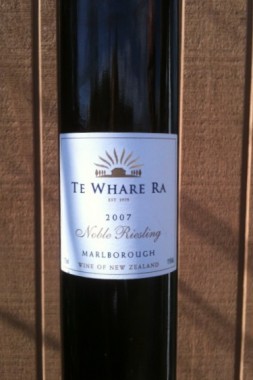 TWR used to be famous for its dessert wines, but when Anna and Jason took over, they widened its repertoire although I think its strength still lies in the aromatics.  The Flowerdays have continued the tradition of  making a great late harvest Noble Riesling. We bought the 2007, which was a delicious combination of apricot jam and candied citrus peel with a nicely-balanced level of acidity. But they also do two other styles of Riesling – a light, floral, citrus, lower-alcohol old skool (Germanic) one, and a more typically New World one whose acidity sang from the rooftops after the Kabinett-style wine. I particularly liked the fresh-tasting Pinot Gris ’09, which was like a burst of white-fleshed nectarine and the ginger and cardamom -infused Gewürztraminer. TWR also makes a field blend of all three of these grapes called Toru (which means three in Maori), whereby the Riesling, Pinot Gris and Gewürztraminer are grown in the same field and – in Anna’s words – “squished” together and then fermented. It was simple, tropical and spicy with a nice medium body which always feels so nice in the mouth. We also tried the ’09 Sauvignon Blanc, the new release Pinot Noir and an intensely blackcurrant-y Syrah.

We both loved talking to Anna and having her talk us through each wine. We’d have happily carried on chatting had other people not turned up. And, despite the fact that she must hear this every day, she still appears amused when you mention how apt the name Flowerday is for a biodynamic wine grower. How polite. 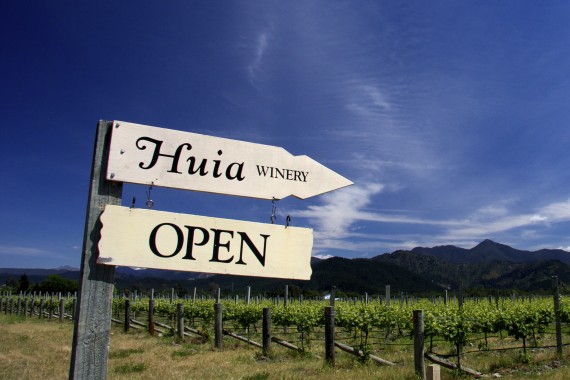 We realised how spoilt we’d been at TWR when we turned up at Huia where there were already a group of Australian women getting the full attention of the man managing the cellar door that day. And then some people we’d met in Abel Tasman park turned up. At Huia, we had to ask what we wanted to try and, given that there was only one person trying to make us all feel loved, we only sampled four wines. We tried a very bready bubbly which I think was the 2002 Brut but I stupidly didn’t make a note of the name. We also tried a powerful 2007 Gewürztraminer which smelt of lychees and roses but, on the palate, I felt these were lost too quickly to some heavy spicing and alcohol – this clocked in at 14.5% alcohol by volume (ABV) and it showed. 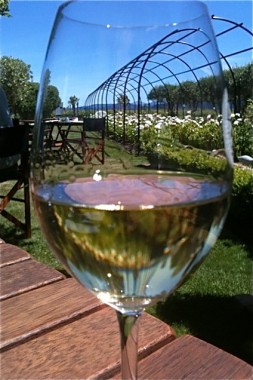 Perhaps this would soften with age. We also tried the 2008 Riesling, which Huia hasn’t made since 2004. It was extremely clean and comparatively austere to other Rieslings we’d tasted in the region, but, we were told, the winemakers were trying the get the purest expression of the fruit and are planning to add some oaking to the next vintage to give it some backbone. Best of the bunch was Huia’s 2009 Sauvignon Blanc, which was chock full of fresh gooseberries and elderflowers but not taken to oppressive, jammy levels.

Then it was onto Herzog where we whiled away half the afternoon at the bistro behind their white clapboard tasting rooms. In a landscaped garden overlooking the vineyards, this is possibly the prettiest and tastiest place to eat lunch in the region. I had a glass of the ripe, nutty, tropical Sauvignon Blanc ‘sur lie’ 2009 which I liked a lot – it felt so untypical of Marlborough. It was matched with a vitello tonnato which, despite the veal being a tad overdone, was beautifully assembled. And the lemon-roasted poussin was perfectly executed – the best thing I’d eaten so far in New Zealand.

Finally, we headed to Fromm, which, like Herzog, has a Swiss winemaker (Fromm has another one who has worked in Switzerland). It has a reputation for making great reds but we’d also heard about their fabulous Spätlese Riesling.  Initially that wasn’t on offer at the cellar door, in favour of some of the wines the vineyard knows will appeal to a wide variety of visitors. But it took just a pretty please and a keen interest to open a bottle of the 2008. Its delicate blossomy nose with just a smidgen of petrol gave us little notice of the zippy, mouthwatering sensational sweet and sour lime flavours which followed. And all for 7% ABV. It’s a new entry in my blog on great wine with low ABVs. A few days later, we drank a bottle of the 2007, which had lost a bit of the zippyness (and was a whisper higher in alcohol at – gasp – 7.5% ABV). But it still ranks as one of my top wines of 2010.