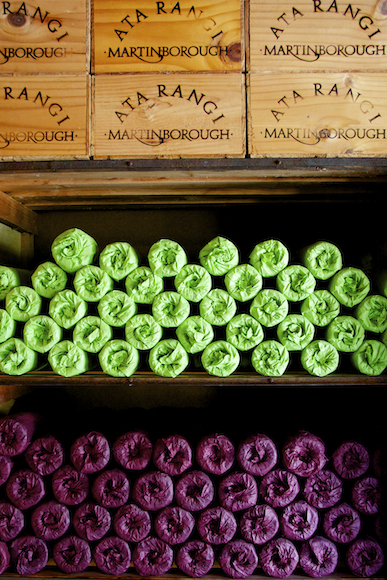 One of the greatest thrills when visiting a vineyard is when the winemaker invites you to sample the wines as they mature in barrel. Especially when the wines are from Escarpment Vineyards‘ premium Insight Series and the man making the wine  is Larry McKenna. But here we were in the bunker-like barrel room at Escarpment in Martinborough, New Zealand, tasting the progress of the Kupe Chardonnay and Kupe Pinot Noir from grapes picked earlier this year. 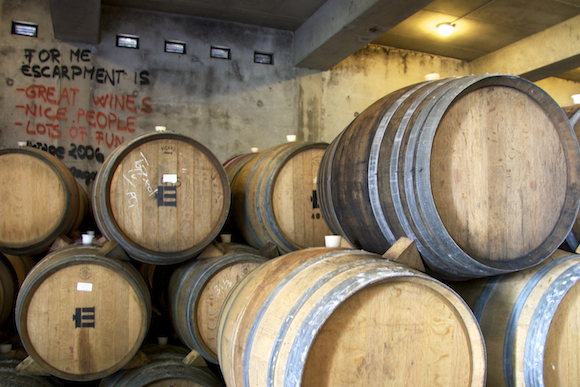 Only eight barrels have been made of the 2010 Kupe Chardonnay (about 3,000 750ml bottles). Its destination outside of New Zealand tends to be higher-end restaurants. Larry is pleased with how the Chardonnay is progressing, although this will not be at its best until a few years hence if the 2008 is anything to go by. According to Escarpment’s website, the 2008 release will “age gracefully”  for up to 10 years. Larry aims to make more Chablis-like flinty, restrained Chardonnays rather than the more typical creamy, peachy, oak-y ones you expect of the New World and the Kupe is meant to be the epitome of that style.

We were also lucky enough to taste some of the unblended Kupe Pinot Noir. One of the samples was from a set of barrels with grapes fermented primarily from whole bunches to provide strong tannins for ageing. The other sample was from a set of barrels where around 60% of the grapes had been destalked prior to vinification and was already tasting of juicy red plums and blackcurrants. The two sets of barrels will eventually be blended and, according to Larry, should be ready to drink in about five years’ time.

Perhaps the visit to the barrel room at Escarpment was more exciting because the vineyard doesn’t have a cellar door. Yet. When I called in the morning to see if we could visit, Larry said we were welcome to drop by but we could taste some of his wine at the Martinborough Wine Centre. And it was true that of the four bottles this showcase of regional wine actually had open, one was from Escarpment – a passion fruit-infused The Edge Sauvignon Blanc 2009. The other three wines were all from Te Hera, the centre’s “winery of the month” (and, at time of writing, still is according to the centre’s website). So, at lunch at Greytown’s Bar Salute, Mr. SipSwoosh did the honourable thing and had a glass of the steely, lemon and blossom Escarpment Riesling 2009. Just so that I could have a taste, you understand…

When we did make it out to Escarpment, I commented to Larry that it must be quite a commitment for him to show around everyone who calls up for a visit. But apparently, most people prefer to drop into wineries that advertise their opening times (and I guess have a cellar door), so apparently it’s quite manageable. The ones who do call are really interested and are, therefore, worth the investment in time.

As Martinborough is a mini-break mecca for Wellingtonians, many wineries are shut on weekdays to prepare for the weekend onslaught. Fortunately, the two other places I really wanted to visit were open: Schubert Wines and Ata Rangi. 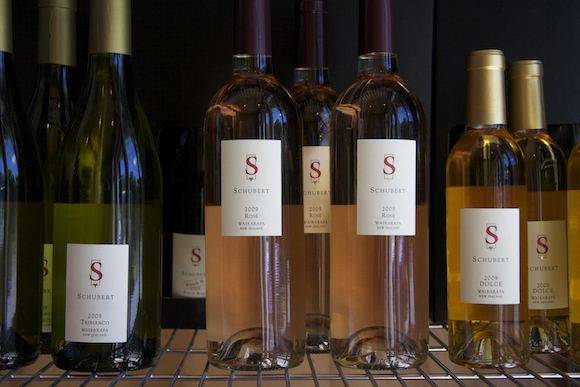 At Schubert, the German owners/winemakers Kai Schubert and Marion Deimling take “hand-crafted” to a new level. For red wines, they still manually mix the grape skin and pulp with the juice (called pigeage) to ensure that colour is extracted and that the must can ferment into wine under this cap of grape solids. It used to be done by foot of course and most wineries now do this by machine. The winemakers at Schubert also don’t use pumps to transfer grapes into the fermentation vats. They use gravity instead.

Schubert’s passion is Pinot Noir. It even has its own Riedel glasses made specifically for drinking the hallowed gape . I was very keen to try their award-winning Block B which wasn’t available for tasting, even though we were paying to try the wines – admittedly a nominal sum (and redeemable on a purchase). So we bought a bottle of the 2008, on assurances it was already drinking well, and opened it later in the holiday when we found a decanter in one of the places we rented, to allow the wine could open up. It was worth it. On the nose, it was all dark plums, cinnamon and molasses and on the palate, red cherries and strawberries, pomegranate molasses and roses with a light sprinkling of herbs and white pepper with smooth tannins and a long finish. Oh, and it won best NZ Pinot Noir at the IWC 2010 awards and was declared best Pinot Noir out of 19 countries at the Decanter World Wine Awards 2010.

At Schubert, we also tried the crisp, zippy, strawberry charged 2009 Rosé, where the skins of the Pinot Noir grapes are macerated with the juice for only three hours, making the wine a light pinky-brown “onion skin” colour. I was less keen on the nutty, herby but quite acidic 2009 Tribianco, a blend of Chardonnay, Pinot Gris and Müller-Thurgau. But it was made for ageing and would probably be much better with food. The Müller-Thurgau taken to late harvest, the 2009 Dolce, was very nice – peach jam with hints of light marmalade. I also liked the piercing blackcurrant of the sprightly 2006 Cabernet Merlot blend. And I’m planning on trying the Schubert 2006 Syrah after Olly Smith’s recommendation , if there’s any left by the time I get round to it!

At Ata Rangi, preparations for the wine, food and music festival Toast Martinborough was in full swing and it almost felt like we were interrupting. We were fortunate however that a group of French sommeliers had been in before us, so the full range was available for tasting, including the late harvest Kahu Botrytis Riesling 2010, which is only made in years when the weather has produced suitable grapes – and even then, only small amounts are made.

It was great to taste the different styles of some of their wines. We compared the new releases of the Petrie Chardonnay with the Craighall Chardonnay. The Petrie Chardonnay, made from a clone that produces big fruit and has yeast added for fermentation. It’s bright, citrussy, quite mineral and ready for drinking now. The Craighall Chardonnay is made from the Mendoza clone, a low-yielding vine with smaller, less uniform grapes that give a more intense flavour. The natural yeasts on the grape skins is used to ferment the wine. 2009 was a warm year and the Craighall is drinkeable now, but I’d love to try it when it has softened a bit further and some of those secondary flavours come to the fore.

We also compared the 2009 Pinot Noir, Ata Rangi’s flagship wine and made for ageing, with the Crimson, which is made from younger vines and is ready to drink. My head had already been turned by a bottle of the wonderfully perfumed 2006 Pinot Noir we’d drunk a few days before which, despite being four years old, was still crammed with primary fruit flavours of red and black cherries and red plums. There was some vanilla, black pepper and a slightly bitter herb edge which softened quickly in the glass. We drank it over several hours, and paired it with some sweet nuggets of lightly barbecued lamb shoulder. Perfect. 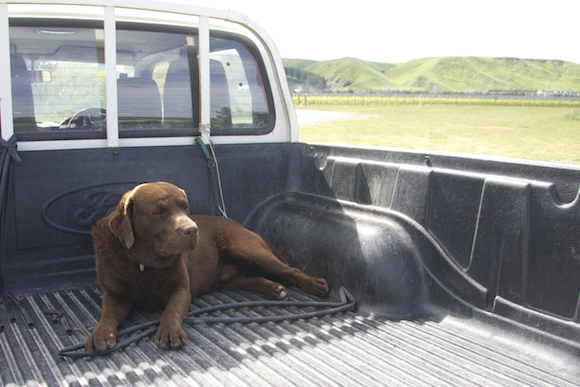 PS: As we were leaving Escarpment, we came across Larry’s old chocolate labrador, Milo, sunning himself in the back of a Ute. But glancing through the Ata Rangi wine brochure as I write this, I see there is still some life in old Milo McKenna as he has managed a little blending of his own with pooch Rata Rangi to produce a black pup!

3 thoughts on “A Toast To Martinborough”