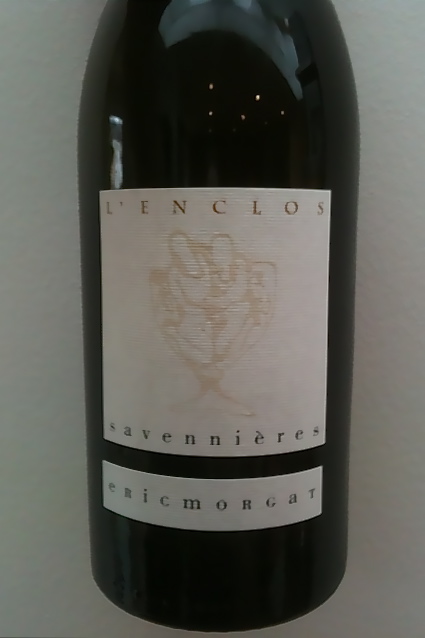 I’ve never thought myself a seasonal drinker. I’m just as happy sipping a ballsy red at a summer barbecue as I am when the temperatures plummet, and a crisp, aromatic dry wine cheers me up no end when it’s cold, windy and wet outside. But recently I’ve tried two very contrasting white wines that have been very evocative of crisp late autumn days and dark evenings when the clocks have gone back. 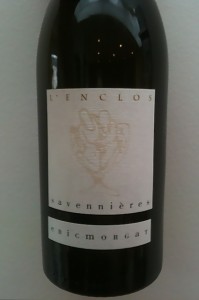 Last weekend I opened of bottle of Savennières which looked and tasted like dry, golden leaves that have just fallen from a tree on a cloudless, sunny October day. Just perfect for the time of year. I’m a big fan of Loire wines but I can’t remember ever trying Savennières before. However, a recent article by Jancis Robinson and subsequent discussions on Twitter got me interested and I bought a bottle of 2006 Eric Morgat L’Enclos  Savennières from The Wine Society.

The plan was to drink it at the weekend with a roast chicken after a morning tidying up the allotment, and I’m sure it would have worked really well. Only we drank it all before the chicken was on the table, we were so intrigued.  It was hard to pick up many aromas on the nose, despite it’s lovely pale gold colour. Perhaps a hint of peach, straw and some nutty oak. It wasn’t exactly in-yer-face-flavours on the palate either at first, apart from some oak. Then we could taste some delicate flavours of acacia honey, nuts, soft, ripe pears and this lovely leafy, camomile herbaceousness and some hints of stone. We also loved the weight of the wine in our mouths – curvy but not fat. 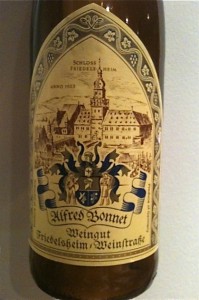 Now, from reading up on the producer, I understand that 2006 was a tough year, and that this vintage may be more reluctant to show its hand than those from sunnier years. If that’s the case, then I’m dying to try more from other years – and, of course, other producers.

By sharp contrast, the following evening I opened a bottle of  (take a deep breath) 2003 Alfred Bonnet Forster Bischofsgarten Weisser Burgunder Auslese a gorgeous, rich later- harvested Pinot Blanc from Pfalz in Germany. It tasted like apricots gently cooked in a richly-flavoured honey with a hint of ginger and allspice.  A streak of refreshing steeliness stopped it from being too cloying. Utterly luscious and only 9.5% ABV (alcohol by volume). The only thing missing was a crackling open fire. I will definitely get some for Christmas from Find Wine.

Speaking of Find Wine, I’m pretty much at the end of the box I ordered from them. I took some of them down to Cornwall and made a few notes, which are always fun to revisit several weeks after the fact. 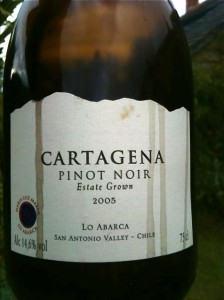 First up is the juicy, dark fruit-laden 2005 Cartagena Pinot Noir from Chilean winemakers Casa Marin , a stonking 14.6% ABV (not 12.5% as the Find Wine site says). If you like your Pinots deep and smooth, you’ll like this. There were some classic Pinot flavours there of blackcurrant leaves and green bell peppers, with a bit of spice adding a little heat and a wonderfully smoky Lapsang Souchong tea finish. Our Scrabble scores on the page after the notes were rather pathetic as a result. 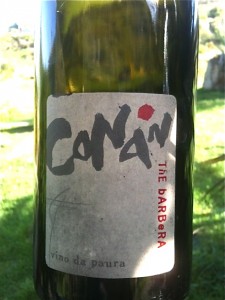 I think the Cartagena would be more suited to the term ‘wine to be afraid of’ than the self-styled ‘vino da paura’ – 2007 Conan The Barbera. But the soft bramble flavours do lull you into a false sense of drinking something moderate in alcohol until you realise this is also 14.5% ABV wine. I loved the purple colour of the wine in the glass, its hedgerow aromas and flavours and the fact that it had decent minerality, tannins and acidity to stop it collapsing into a flabby, fruity mess. Lovely label as well.

Finally, a word on the 2006 Tallarook Roussane. I was expecting a ballsy white, but instead got quite a restrained, clean, complex wine full of lemon sherbet, pear drop flavours, some light honey and sweet spice. I thought the oaking was a bit heavy handed – I wrote it down ‘oak’ as the first flavour and that ‘the oak really lingers’ when noting down the finish – which was a shame. As a result, it didn’t rock my world but it was nice to quaff while watching the sun set over the Atlantic on a late September evening.