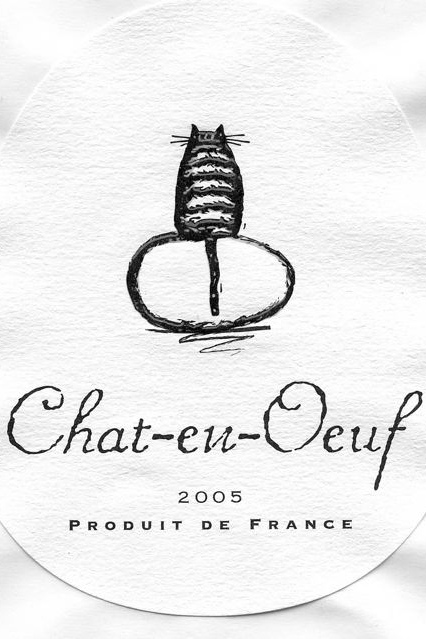 So, you’re perusing the supermarket shelves looking for a spicy red to go with your Sunday roast. Your fingers wander over the Rhones and alight on Chat-en-Oeuf. With a helpful drawing of a cat sitting on an egg just to emphasise the humorous play on words.

At this point you will fall into two camps. The first one is: witty name, a good price, it’s grown next door to a much more famous and expensive wine, let’s give it a go! The other is: avoid at all costs. Trite name = cr*p wine. I fall firmly into the second camp.

Like most of us (like it or not) I’m influenced by a name and a label – good or bad. Rather like those brands of butter-like spreads, a silly named bottle of wine must be masking something an inferior product to the real thing. Chat-en-Oeuf is actually OK – pretty much what you’d expect for under £5. And at least they haven’t called it ‘I can’t believe it’s not Chateauneuf-du-Pape’). But I can’t help finding this humorous naming of wine a real turn-off.

OK. So I don’t mind a little play on words now and again, especially if it involves the name of the grape. Conan The Barbera made me groan a bit but it is a dark, gutsy wine that I can imagine going very well with some rich, truffle-y goodness. Cardinal Zin conjures up images of a dramatic, hot, powerful wine. Pinot Evil… hmmm, maybe smooth, meaty and could lead you astray. But Bored Doe? It’s hardly evocative. 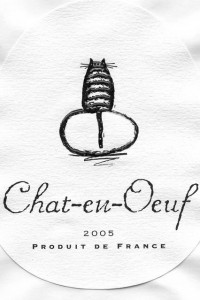 The worst culprits though are the ‘funnies’ with lightly offensive names such as Arrogant Frog, Fat Bastard, Cat’s Pee on a Gooseberry Bush, Bitch ( from the now-in-receivership R Wines), Old Git and Old Tart (can you still buy the two latter?). They’re the vinous equivalent of underpants with slogans on the front.

I know wine labelling is key to selling a wine, especially to people who don’t feel confident or knowledgeable. Descriptions on the back of bottles (if there are any) can wax lyrical about terroir which may mean nothing to the unsure punter. Gimmicky names can attract when consumers are faced with chateau this, that and the other. However, once these unsure people have tried a gimmicky-named wine, how does it encourage them to be that bit more brave?

I have no doubt that there are genuinely good products behind some of these names. The danger is though that they all get lumped together. So, if a producer wants to shift a bottle of plonk aimed at the less discerning Brits, they’ll probably do fine. But if they are trying to gain attention for a quality product – and have a higher price point as a result – I think they’ll get ignored by the people who’ll buy wines for what they are, not what they cost.

STOP PRESS: A couple of weeks after I wrote this, Tim Atkin published  his view on the same subject. I think he is a little kinder that I am. Why not read it for yourself and decide…