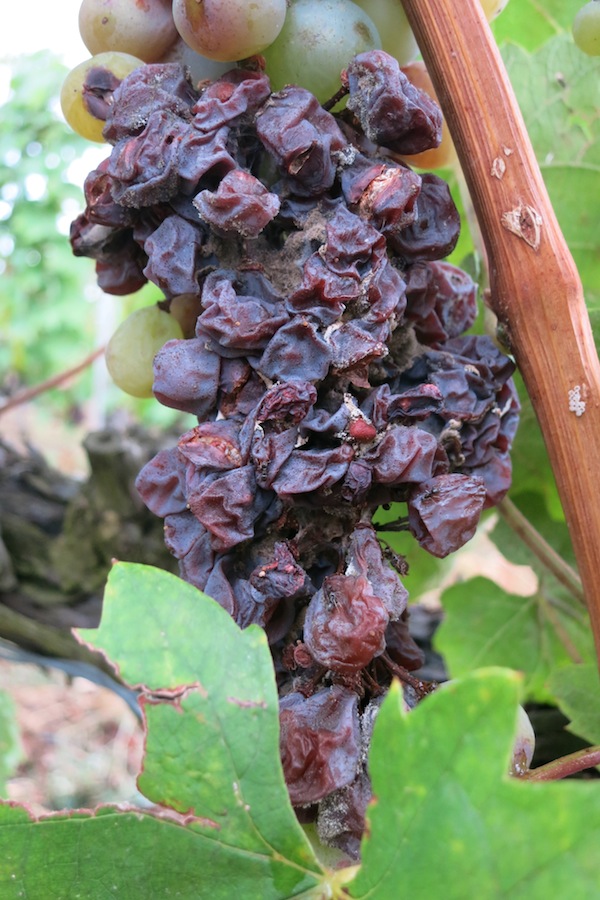 It’s late morning on a grey, overcast day and there’s a solitary man sitting between a row of vines near the Hungarian town of Tokaj.

He’s checking every grape and picking only those with the right amount of desiccation and “noble” rot, (botrytis cinerea).

It’s a lengthy, painstaking job that can take weeks of passing up and down the vineyard for those perfect grapes – or aszú berries, as they become known (and first mentioned in the 16th century). 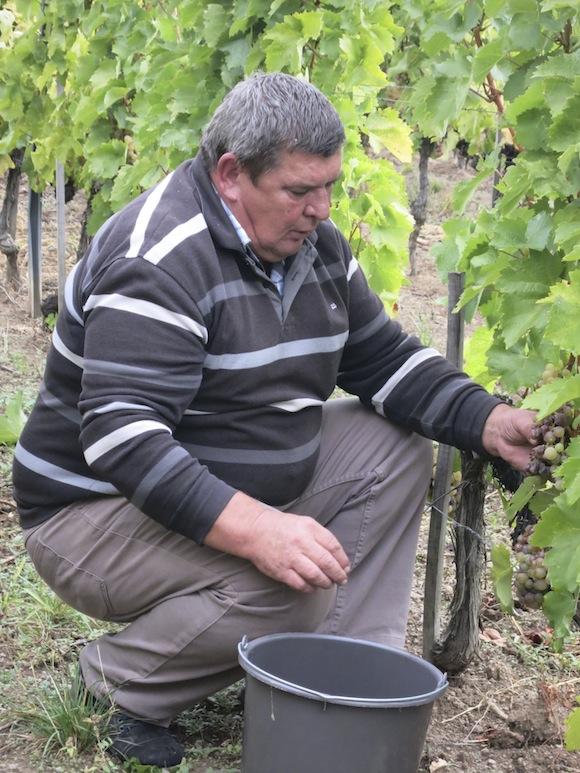 Only the best will make it into Tokaji – the sweet wine from Tokaj. And if you want to know why it costs what it does, here is your answer.

“It’s probably the most labour intensive picking in the world, ” says László Mészáros, the director of Disznókő whose vineyards I’m standing in.

The idea is that I join in and learn to distinguish right from wrong. But with the clouds threatening to burst (which later, they do) I stay as an observer. Not much will be picked today. 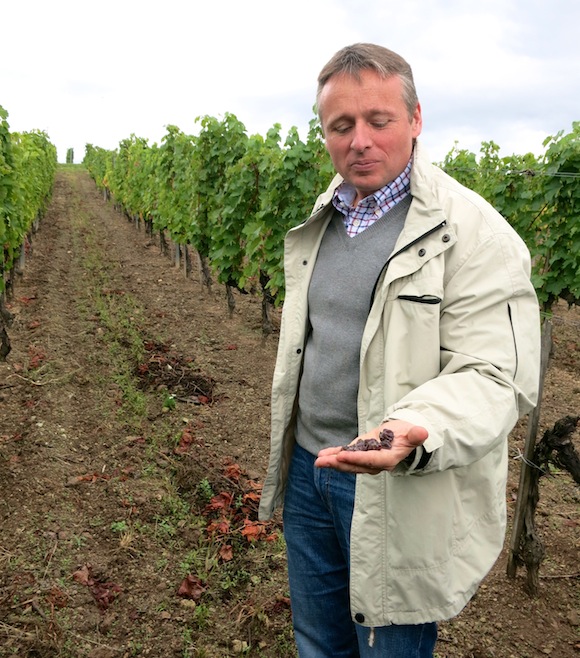 Luckily, the weather has been fine until now, so the berries are in good shape, and the haul from the day before is plentiful. For aszú berries, that is. László explains that just 6-10kgs of berries are picked a day. A drop in the ocean for normal grape harvests.

The individual berries are stored in vats until harvest is finished, usually in November.  The juice that runs freely from the berries stored this way – or slowly drips, to be more accurate – is called eszencia. Only small quantities are produced, it can age for many years and is very expensive. 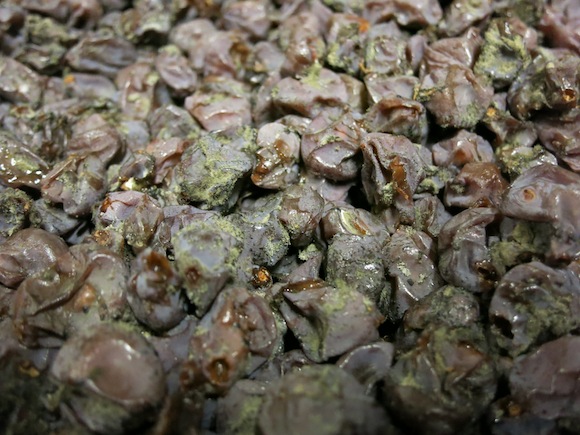 “The berries are so dry and shrivelled, it would be impossible to press them,” says László.

Instead, when all the berries are picked, they are soaked either in a base wine,  or in a fermenting must that is yet to become wine. Both are made from the same grapes as the shrivelled berries – Furmint, Hárslevelű and Zeta in the main – but picked a lot earlier. The ratio of base wine to berries ultimately determines the sweetness of the wine, called puttunyos, or “putts”. While Disznókő used to make wines with 3 or 4 putts, today it focuses on 5 and 6 only, and eszencia.

At Disznókő, all the Tokaji wines start out classified as 6 putts But if it doesn’t have the structure and acidity to support the sweetness, it will get downgraded to a 5 at some point during the maturation period. So you won’t find a Disznókő 6 putts every year, such as in 2007. 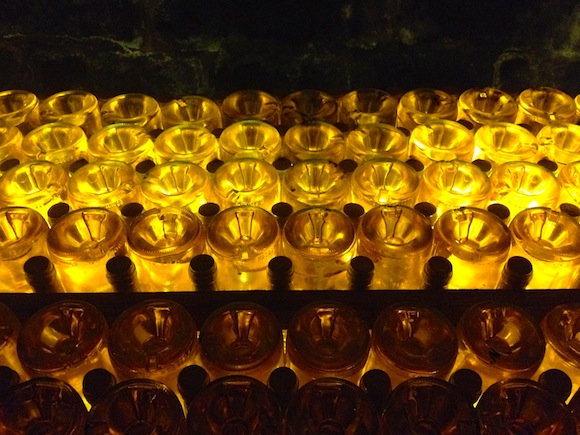 The berries from different lots or parcels around the vineyard are fermented in steel tanks, often with a couple of days skin maceration – like with red wine – to give it structure and extra ageing ability. The wine is then aged in used oak barrels and blended before bottling – though Disznókő also makes a single vineyard 6 putts Tokaji occasionally, from a parcel called Kapi. Only two vintages have been made so far. The 2005 feels incredibly clean to taste, with rich flavours of roasted exotic fruits tempered by a zesty freshness that makes your mouth water.

For this is the hallmark of Disznókő. Intense flavours with this scintillating acidity that often makes you forget just how much sugar is in each glass – around 90 grams of residual (or unfermented) sugar per litre.

I Tried Everything (Well, Almost)

Over the course of 24 hours – with some sleep in between of course – I get to taste an array of Disznókő’s back catalogue,  from when its post-communist fortunes were revived by AXA Millésimes in the early 1990s. An extended masterclass, if you like.

László doesn’t just show what he considers the best years for Disznókő, such as 2005 and 2002 . He also opens those from more challenging years, such as the “rustic” 1997 6 Puttunyos (from a cold year) and the lighter 2007 5 Puttunyos (from a hot, dry vintage) which feels like a late harvest wine than a proper Tokaji. Not bad wines at all, but completely blown out of the water by the 1999 6 Puttunyos. That stinging slap of freshness, the reverberating tingles on your tongue, the concentration of roasted tropical fruits and lick of honey that lingers. Wow. 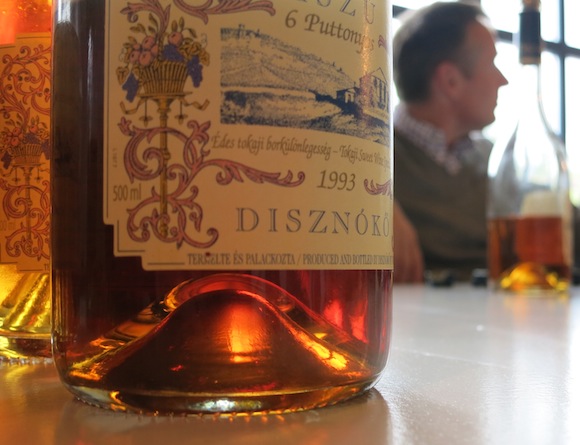 Perhaps the most interesting is the 1993 5 Puttunyos, the second vintage made under the ownership of AXA Millésimes and the first Disznókő Tokaji I can remember trying. 1993 was an experimental year where Disznókő tried a lot of different techniques. For example, the skin maceration and barrel ageing was longer than today.

“It was an important moment in Tokaji history… it wasn’t oxidised,” says László, referring to the style in which Tokaji used to be made. The wine was released it in 1997 when it was still fruity and young. As a result, says László, many critics thought it wouldn’t age. How wrong they were. A burnished amber colour, it smells of Victoria plums, black tea and dried apricots. To taste, there’s a caramel note layered in with the tea and dried fruits, and a great balance between richness and acidity. At its peak now, László reckons it could stay like this for another five years before heading downhill.

There Must Be An Angel

And downhill was where I start to head once we started on the “free run” eszencia. It is so intense and syrupy, it coats your mouth, so spitting it out is hard. Plus, with alcohol levels close to 1%, there is no real need; you’re likely to fall in to a sugar coma before you fall over drunk. 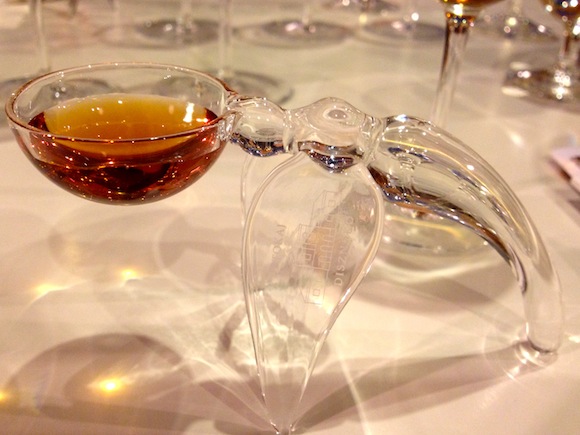 One spoonful does makes a delicious liquid dessert, and Disznókő commissioned a special receptacle – an angel, apparently – for the purpose.

I have more than one spoonful though. From the 2005, just shy of 600 grams of sugar per litre, to tasting some crystalline versions from glass demijohns in the cellar. I could feel my pancreas groaning even before I sat down to dinner.

Don’t get me wrong. Eszencia retails for around €400 per 375ml in Hungary. It was an absolute treat to sample as much as I did.

But sometimes you really can have too much of a good thing. Even Tokaji. 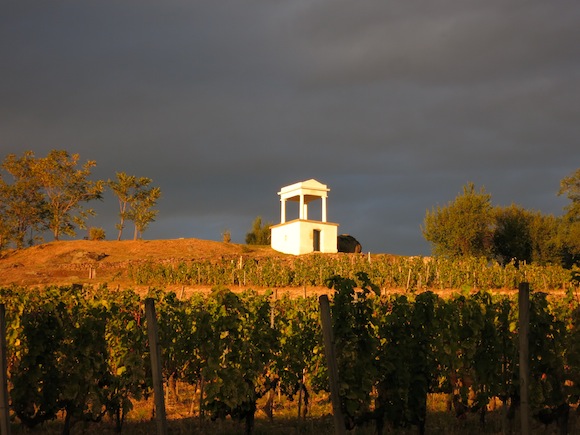 Disznókő is imported by Champagnes & Chateaux