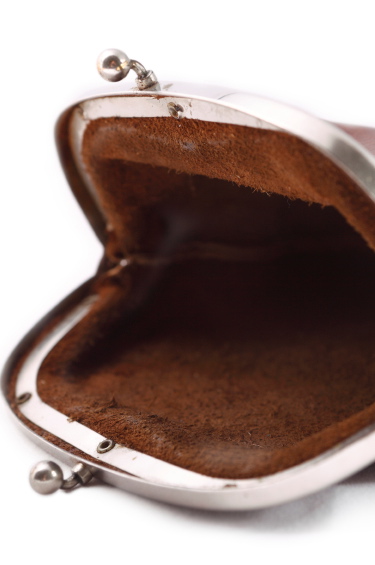 So, buying a bottle of wine in the UK has just got more expensive.

a) Trade down – which could mean more goes on tax. Producer Gavin Quinney has calculated that half of what you spend on a £6 bottle of wine is tax.

b) Drink less, but better – something your doctor would approve of, no doubt.

c) Get more savvy about wines that offer more bang for your buck – such as those from Languedoc-Roussillon in South-West France.

Lying almost between its more famous neighbours of Bordeaux and the Rhône Valley, Languedoc-Roussillon offers real diversity, not just because of the wide variety of grapes grown there but also the different terrains under vine in this large region.

Picpoul de Pinet, for example, is a much better buy than Pinot Grigio at that lower price range.

The fortified dessert wines like Banyuls, Rivesaltes and Muscat de Saint-Jean-de-Minervois are to die for. And there’s a sense of a real pioneering spirit, of people who want to make great wine – both conventionally and more naturally, and also within and beyond the rigid appellation system. Many a wine lover’s heart beats faster at the thought of Mas de Daumas Gassac Rouge, one of the most revered wines of the region. 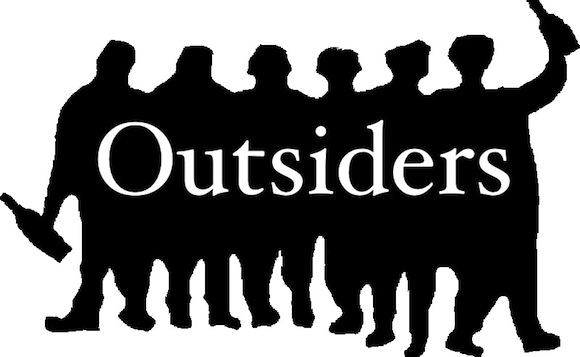 Then there’s The Outsiders, a group of people who’ve relocated to this region to make wine, many for the first time.

Fresh perspectives bring fresh ideas, such as Domaine Turner Pageot’s La Rupture, a Sauvignon Blanc, but not as you know it. While most Sauvignon Blancs are fermented cold to keep all those pungent aromatics, La Rupture has riper flavours due to its fermentation at 28C, but still maintaining some sparky Sauvignon energy. 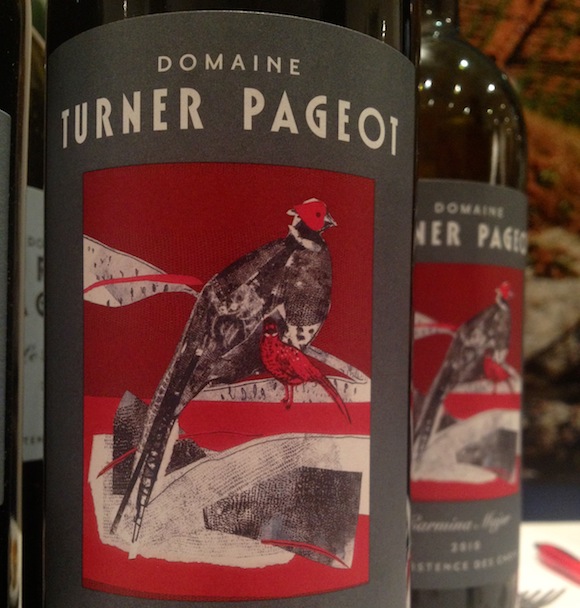 Le Clos du Gravillas makes some great wines within the Minervois appellation – such as the vibrant, rich, ginger-flecked L’Inattendu (great with canned sardines apparently). But the IGP (Vin de Pays) wines from the endearingly-named Côtes du Brian are also very accomplished, such as the pure, crisp and decidedly different Emmenez-Moi au Bout du Terret Blanc, made from local grape Terret Bourret (aka Terret Gris). The reds are good too.

Mauzac is a grape grown in the Limoux apellation, the most westerly in Languedoc-Roussillon that makes clean, bone dry sparkling wines. Château Rives-Blanques has tamed this into a savoury, spicy, rather curvy white called Occitania. Chardonnay is also widely grown, and Rives-Blanques has blended this more commonly-known grape with Chenin Blanc and a generous splosh of Mauzac to make Le Limoux. The 2010 I tried was supple and delicious, with hints of baked apple studded with cloves.

None of these wines are cheap, in the supermarket discount sense. What they offer are excitement, intrigue, craftsmanship and value.

Yet cheap is how many still view wines for this region, according to Marcel Orford-Williams, who buys wines from the region for The Wine Society.

The Society got together with Sud de France recently to organise a truffle-themed dinner for its members to, as Marcel put it, “shed a light on the Languedoc”. I was among a group of wine writers who nobly road-tested the menu a few hours beforehand.

Franck Putelat, chef-patron of the two Michelin-starred Le Parc in Carcassonne, flew in to cook the lunch and dinner, held in the splendid Merchant Taylors’ . The man who’d hunted the truffles just a few days before, Philippe Barrière, also came along. 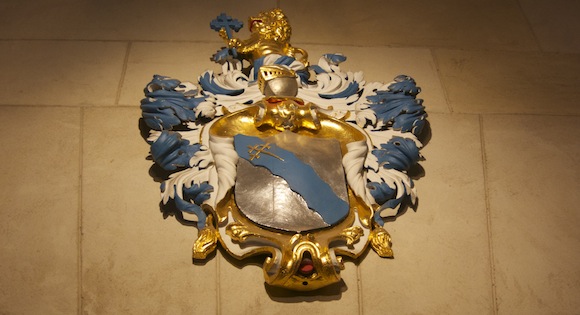 Perhaps a truffle lunch and value wines sound strange bedfellows – especially as some of the wines on show retail for under £10. That was the point: to show that even at the budget end, wines from Languedoc-Roussillon are much more than plonk. They can sit proudly alongside the most exquisite of dishes.

Seven producers joined us and although seemingly more conventional than perhaps those I’ve met via The Outsiders, they’re still making interesting stuff.

For example, Domaine de Barroubio specialises in Muscat Saint Jean de Minervois. There’s a classic version of this fragrant dessert wine, but also one where the fermented Muscat grapes sit on their lees and another where the grapes are picked much later than for the other wines, and half the wine is aged in large barrels. 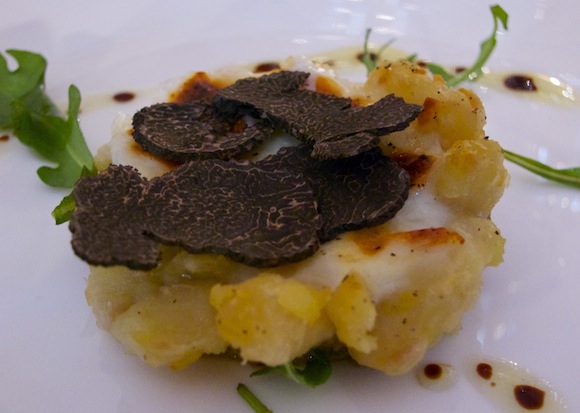 Bourboulenc is a white grape usually used for blending. Domaine de Simonet makes it as a ripe, herbal, varietal . Incredibly food friendly too – the best match with our first four dishes, especially a spankingly-fresh oyster tartare with beef, artichokes and truffle.

Now, I’ve banged on about the whites, because that’s where I’ve got my thrills. But, according to Marcel: “If the Languedoc is to succeed, it has to go with the red.”  And I think of ripe, fruity concentration. Or spicy, thyme-strewn stones. Or depth, purity and structure. Languedoc-Roussillon reds come in different guises, but are never shy. Just thinking about Faugères, Corbières, Saint-Chinian and Minervois (to name a few) warms me up inside.

I’d never heard of the Cabardès appellation before the truffle lunch, and was intrigued to hear from Miren de Lorgeril about how its “rare” position influenced her L’Esprit de Pannautier.

“It’s a very special cuvee where we have to balance the Atlantic and Mediterranean winds,” she told us, adding that the Mediterranean wind was more influential in 2009 (the vintage we were drinking), so there was lots of Syrah in this particular blend to reflect this. 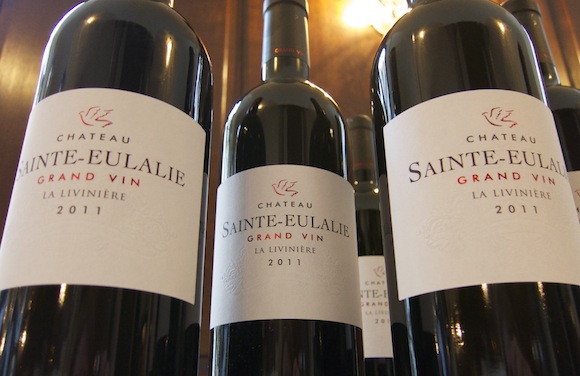 However, the Minervois La Livinière, Cuvée Cantilène 2010 from Château Sainte Eulalie was the more food-friendly of the two at lunch, working surprisingly well with both a a chicken dish (yes, with truffles) and a glorious truffle-studded molten Vacherin. 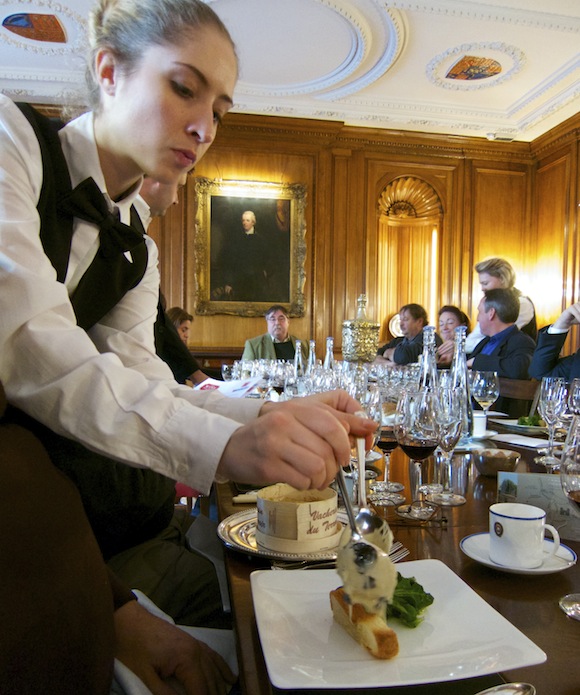 Dessert? Yes, that had truffles too. In the ice cream on the pear. Seriously good.

But the best bit? The match with a naturally fermented sparkling demi-sec from Antech made from Mauzac left on the vines a little longer than for the brut versions. The 85 grams of residual sugar (left after fermentation) in the Blanquette de Limoux, Méthode Ancestrale might be a “nightmare” in Antech’s cellars – bottles can explode due to refermentation – but to drink, it was a voluptuous, caramel and apple slice of comfort you need when times are tough.

Where to find the wines

Unfortunately, not all the wines I have mentioned are imported into the UK.

So, I’ll mention the ones that are:

Château Rives-Blanques: Enotria  (though not the Occitania at the moment, it seems)

– Logeril’s Château de Pennautier (as does Majestic) and Terroirs D’Altitude Cabardès. This former is, I think, the entry level version of what we drank at lunch and was available for tasting beforehand. It’s an easy-drinking style and amazing value.

– Domaine de Barroubio Muscat (as does Enotria), and an interesting, summery dry Muscat

– Antech’s Blanquette de Limoux,  Brut Nature. Completely the other end of the spectrum from the Méthode Ancestrale, but a cracking aperitif.

And many, many more…

4 thoughts on “Because I’m All About Value”