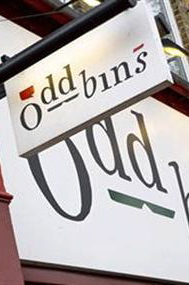 Newsflash! Oddbins is back!

I don’t mean that 37 of its stores were saved from administration. That’s, like, old news innit. I mean its shelves are filling up with wine again. Interesting, good value wines, some which are exclusive to Oddbins.

Take the Casa Lluch Blanco  2010 from Valencia in Spain, made from a local grape called Verdil.

Apparently, this is not the world’s most exciting grape. Nevertheless, the producer Bodegas Enguera has turned out an appealing, lightly aromatic fresh apricot and raw almond wine with a creamy roundness and a spicy tingle. It’s not seen any oak, even if it feels like it might have brushed past a barrel. Oh, and the grapes are organic.

For £8 this is a nice white wine for cooler nights.

Then there’s the Alma de Tinto Mencia 2010, Mencia being another Spanish indigenous grape. This wine has a rather savoury blood and cranberry nose, and some intense cherry flavours in the mouth before a super strawberry finish tempered by some mildly drying tannins.

I also liked the Latria 2006 from Celler Malondro a blend of Garnacha (Grenache) and Cariñena (Carignan), full of bright blackcurrants, with some green leaf and subtle spice action in the background. At £9, it shows that sometimes you can pick a good wine by its pretty label.

Conversely, don’t be put off by the jolly label for Green Fish Verdejo 2010. It may look like it’s trying too hard but really, it absolutely reflects what is in the bottle. It tastes of green apples and grass and goes well with fish (shellfish and white fish I would say).

My advice is, if you like cheap crisp whites, don’t spend your £6 on a mediocre Pinot Grigio. Buy this instead.

In fact, the new Oddbins has more than 40 Spanish wines on its list, showing there is so much more to this country than Albariño, Rioja and Cava. Mind you, I’m glad to see the crisp but biscuity Torre Oria Brut Reserva back on for £8 – a Cava that will turn any Champagne-lover’s head. I bought this under the old regime and was disappointed when I couldn’t find it any more.

There are plenty of wines from other countries of course. A few at the high end but many, many around the £7.50 to £12.  Of the 20 or so wines I tasted recently at Oddbin’s Clapham branch, my other picks were:

* Vinum Chenin Blanc 2010 – made from old vines in South Africa, it has an unctuous mouthfeel with some deliciously toasty flavours wrapped around grapefruit and herbs. £10.

* J Boutin St Joseph Parcelle de Jean 2009 – an unfiltered Northern Rhône Syrah made by winemaker Stéphane Vedeau, who believes in minimal intervention in the vineyard. This is a smooth, weighty, deep, black cherry-driven wine with a sprinkle of savoury spice. At £19, makes a great treat.

Finally, a mention for two Italian wines – a white and a red – that Emma Nichols, the head of buying at Oddbins, described as “good honest wines”. The Gufo Bianco Terre di Chieti 2010, made from an Abruzzo grape called Pecorino,  is shiny and bright, with an acidity that would make it a great partner for light salads as well as seafood.

The Gufo Rosso 2010 tastes of crushed red berries. Pleasant, straightforward, drinkable. And you can’t always say that for £6. Unless it is a supermarket discount….

Clearly, I didn’t try everything in the store. But overall I was pretty impressed by what I did taste, in terms of quality versus price, and the diversity. Will it be enough to compete with the supermarkets and Majestic? I’d like to think so, if they can encourage people to see Oddbins as a store where you can try something a bit different – as well as good examples of your favourites – at a pocket-friendly price.

I’ll definitely be back to buy some of these wines.

3 thoughts on “Something Old, Something New…”