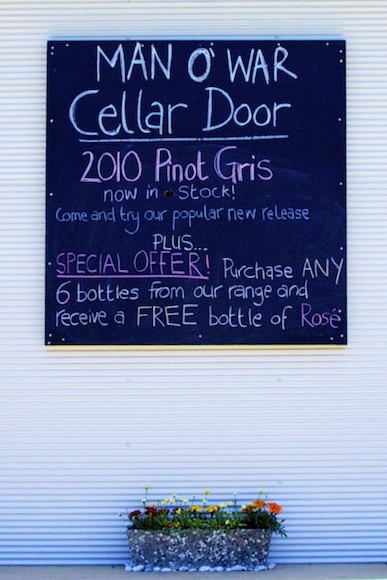 Reaching Man O’War vineyard’s cellar door on New Zealand’s Waiheke Island takes some dedication. The unmade road that takes you there is not for the fainthearted, with its sharp drops, steep climbs and tight bends. And it seemed a lot longer than the 4km advertised at the turning into this road.

But, as we dropped into the calmness of a small crescent bay, replete with Kodak-moment turquoise sea and a lone, moored yacht in the distance, we spotted a tin shed in a field by the beach. Vineyard manager Matt Allen wasn’t wrong when he’d told me to prepare myself for the “coolest little cabin cellar door you have ever seen.” 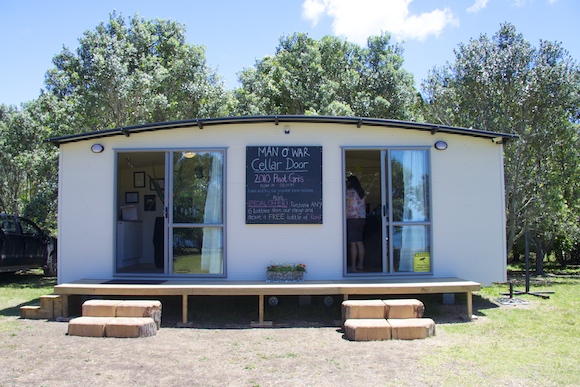 Monday is a day of recovery on Waiheke, after the weekending hordes disappear from the idyllic island near Auckland. As a consequence, many vineyards are shut, including Man O’War. But, having missed the some of the team when they visited the UK recently, I asked if they would do the honours when I was down their way. Lucky for us, they said yes. And lucky for the visiting Aussies who tagged in behind us and left with 10 bottles after the tasting.

First off we tasted the 2009 Sauvignon Blanc. The aim at Man O’War is to produce one with high acidity, and the grapes are grown on the highest ground they have on the island, so it really benefits from the cooling ocean breezes.  Man O’ War has numerous blocks throughout this part of Waiheke, all with their own names – including “Bitch”, “Lunatic” and “Asylum”. Matt told us that some were named after ex-girlfriends of people at the vineyard. We were too polite to ask for specifics.

The Sauvignon Blanc is a pretty classy drop because while you have the mouth-watering acidity, there is also a satisfyingly generous dollop of fruit, so it doesn’t feel tart and thin.  Then it was onto the 2010 Pinot Gris, grown on a nearby island called Ponui, and just bottled the week before.  Vibrant and full of crunchy, ripening stonefruit and citrus flavours, it was hard to believe this clocked in at a massive 14.5% ABV (alcohol by volume). Mr. SipSwoosh particularly liked this, which – like the Sauvignon Blanc – is out under Man O’War’s White Label, the ready-to-drink “super premium” range. I can’t wait to try Exiled, the new later harvest Pinot Gris which is poised to make its debut under the Black Label as I write. The Black Label “ultra premium” range is Man O’War’s flagship brand, using the best grapes and vinification techniques e.g. wild yeast fermentation where possible and longer time in new oak. Generally, they benefit from a bit of cellaring to catch them at their peak. 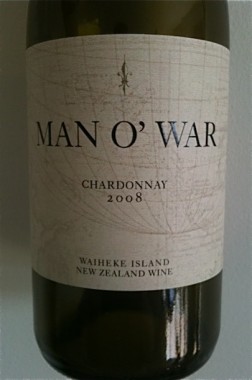 We’d opened a bottle of the (much lauded) White Label 2008 Chardonnay the night before, so tasting this wonderfully citrus and sourdough wine again was simply so we could compare it with the Black Label 2009 Valhalla Chardonnay. The idea with Valhalla Chardonnay is to produce a Cote D’Or Burgundy style-white, and while the 2009 certainly had a lovely weight and richness, it needs more time to soften and integrate. Matt reckoned it would be perfect in about four years.

Man O’War do a very decent rosé wine, made from Merlot. “Strawberries and cream” said one of the Aussie ladies. Yep, that’s sums it up nicely. Then it was onto the reds: two great Bordeaux-style blends and a stunning Syrah. Man O’ War began making Bordeaux-style blends because Waiheke is on a similar latitude to Bordeaux, the clay soil is alike (to the right bank I would think) and it too has a maritime climate. The vineyard produces a White Label Merlot Cabernet Franc Malbec and a Black Label blend called Ironclad which has the same grapes, in different quantities, plus some Petit Verdot. Matt summed it up perfectly when he said the White Label blend would be a great by-the-glass offering in a restaurant. But I was particularly excited at the thought of the 2008 Ironclad blend in a year or so. Or with a large hunk of roast red meat.

Finally, the 2008 Dreadnought Syrah – which simply blew me away with its perfumed black plums, ripe blackcurrants, juicy cherries, pepper and incredibly long finish. Those perfumed plums lingered long after we’d said our goodbyes.